A friend recently gave me a porcupine quill that he had found 40 years ago in northern Italy, and I immediately held it like a pen. That gift encouraged me to start making custom, porcupine quill, dip nib pens that I call PORCUPENS ©.

The materials I use:

BODY: Quills from Old World Porcupines (quills are a renewable, elegant, resilient resource; they are released by contact, and drop out when the porcupine shakes its body; new quills grow to replace lost or used ones). There are no species of porcupines listed as endangered.

NIB: New nibs (manufactured in the 1930s and ’40s by various companies in the United States and England, including L. W. Holley & Sons Co.). The nibs are made from Sheffield steel, with a double coating of copper, before final silver plating.

GRIP: Canadian deerskin (deer are not endangered and are not subject to controls by CITES, the Convention on International Trade in Endangered Species of Wild Fauna and Flora); the deerskin provides a firm, soft, textured, non-slip grip.

The porcupine quill, nib, and deerskin will last your lifetime, and beyond. Each  PORCUPEN © is made by hand, and each one is unique.

The name PORCUPEN (for a porcupine-quill, dip-nib pen) and the associated logo are Copyright © 2018-2020 by Carbon Communications Inc.

Calligraphy ink, in a wide variety of colours and prices, is easy to purchase in craft stores and online. A small glass bottle will last you a long time.

Like many people, I am yoked to my electronic devices. I sometimes think I could not live without them. But I am also attached to the real world, the analog world, the world of nature. In his recent book Fewer, Better Things: The Hidden Wisdom of Objects (Bloomsbury, 2018) Glenn Adamson, a former director of the Museum of Arts and Design in New York, writes about the suffering of the natural world and our relationships to it. In a review of the book, which I read online, The New York Times said: “When we look up from our screens, we find we have lost our connection with the physical realm, which according to Adamson is the embodiment of our shared humanity. Objects, particularly well-made ones, contain intelligence in the form of ‘thousands of years of accumulated experiment and know-how.’ By forfeiting an understanding and appreciation of objects – their materials, how they are made and why they are as they are – we forfeit the power they have to enhance our lives and to connect us with one another. If we were to love stuff more and better, Adamson holds, we’d want and waste less of it.”

Some Spellings of the Word “porcupine” Over the Years and from Various Languages:

A PORCUPEN © bouquet (and the long shadow that writing casts): 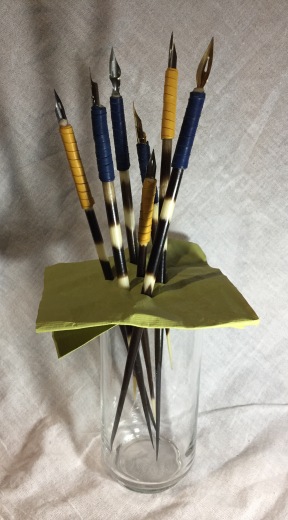 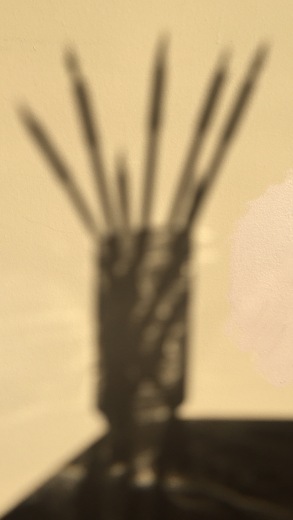 A Brief History of Nibs

– Here is a fresco from Pompeii, competed between 55 and 79 CE. Some think this may be the Greek poet Sappho of Lesbos (c. 630 – c. 570 BCE). The woman holds a wax tablet “book” and a pointed stylus, an early version of the nib pen. A copper nib was found in the ruins of Pompeii, demonstrating that metal nibs for writing were in use not long after Julius Caesar and Jesus Christ were alive.

– In 953 Ma’ād al-Mu’izz, the Fatimid Caliph of Egypt, asked for a pen that would not stain his hands or his cloths. A pen was developed for him that held ink which was delivered to the nib.

– In his Deliciae Physico-Mathematicae of 1636, German inventor Daniel Schwenter described a pen with two quills – one quill served as a reservoir for ink inside the other quill. Note the crossed quills and the inkwell in image 14 from the cover of the book, toward the bottom right.

– A quotation from Elizabeth Griffith, in A Series of Genuine Letters between Henry and Frances, 1757: “Come, spread your Paper, sharpen your Wit, nib your Pen, and away with it.”

– John Mitchell of Birmingham began to mass produce pens with metal nibs in 1822.

– Chamber’s Encyclopedia in 1865 notes how to fit “small metal or even ruby parts to the nib of the quill-pen.” 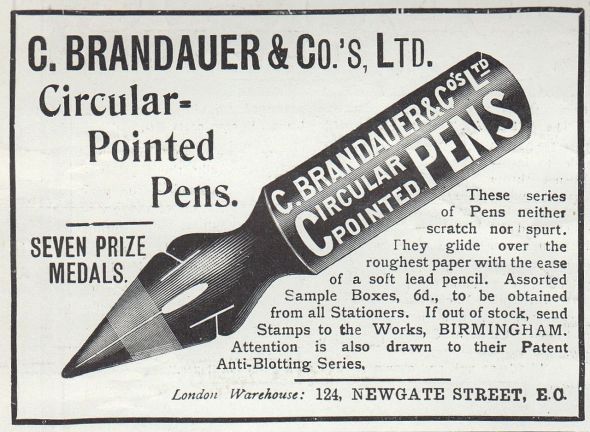 OVERVIEW AND INSTRUCTIONS FOR YOUR PORCUPEN 2020

For information about pricing, availability, packing, and shipping options for PORCUPENS ©: Contact